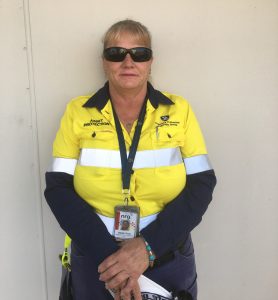 Zane Kemp recommended Steph for a spotlight. Steph recently was awarded a MAD (Making a Difference) Award, will recently mark her 10 year anniversary with the Group from 1st October when CPA Group took over the service at NRG Power Station. We are very much looking forward to meeting Steph!

We caught Steph at home in Gladstone, she has been living there for 9 years after transferring from Rockhampton.

What is your professional background?

I have been in  security approximately 13 years, initially cash in transit, I had a weapons permit, doing patrols for a local company in Rockhampton.

In 2011 I did some D&A testing for Rio Tinto, then went to NRG Power Station in around 2011, CPA Group cam in on October 1 and I was offered a job and I have been here since.

Where are you working now?

My role at NRG is Plant Protection Officer (PPO) as part of the CPA Group security team. We have a 4 on 4 off roster, 2 guards during the week until 22:00 then one guard at nights and weekends. 12 hour shifts.

Nick Fruk is my team leader, who took over from Zane Kemp.

What other CPA Group sites have you worked?

This is my first CPA Group site but it has been 10 years.

The contract is up for tender soon and I think it has been good for them to see how we have performed during the overhaul as we provided lift guards, car park guards as extra positions. Hopefully that will help when the tender is decided.

I have seen CPA grow so much in 10 years, the two guys at the top are great guys, I love it when they come to town. I see Harley regularly when he comes, Sam came to site recently.

What are your primary responsibilities?

Day to day administration, night shifts includes lock up, receiving deliveries. It is a bit quieter at weekends Saturdays are quite busy so we do patrols where possible.

What do you find most challenging or fulfilling in your role?

I enjoy working with people, helping to solve their problems, showing them around if they need help.

I also enjoy working with new people. The CPA team is very stable, I get to work with the entire team when I do extra shifts.

We are in the midst of an overhaul and there is a lift guard. With all the people on during the overhaul, 7 floors and one lift, the lift needs managing. You get to meet different people, possibly only for a minute between floors but you do learn about the different groups.

We work as a team, you have to have great communication with the person you are working with. For the shut, we work extra shifts so the client knows CPA Group can always provide staff whener it is needed.

And what do you do in your spare time?

Lately, with the overhaul, I have been very busy so doing some extra shifts.

The youngest of my 5 daughters is a sports shooter so we joined the local shooting. When I get a chance I like to have a game of golf. I am not as accurate as I would like to be.

I played a local charity golf event recently as they needed an extra player, I try to do something like that every now and then.

Did I mention my 7 grandchildren, number 8 arriving in January! The family is located in Gladstone, Rocky and Brisbane. I come from a big family (one of 9 and a twin!) so I am well prepared for such a big clan.

I like balance in my life, work, interests and family. If I have to work at Christmas we work around that.

What would your manager say?

We decided to ask Win Marsh and Nick Fruk.

Win – I hope she would say that I am useful.

Steph is an asset to the NRG team.

I have worked alongside Steph for the last 9 years & the last 2 years, I’ve been her Team Leader, in that time I’ve found Steph a very dependable, loyal and hardworking employee. I find that if I am ever struggling with someone who has called in sick late notice, she’s always willing to come to the rescue within moments, Steph always try’s her best to lend assistance even helping to train new starters. She is a responsible and a strong member of the team.