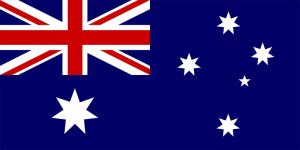 The flag’s original design, was chosen from 32,823 entries in a public competition held in 1901, following Federation. The original winning design was first flown in Melbourne on 3 September 1901, the date proclaimed as Australian National Flag Day. This version had a six-pointed Commonwealth Star.

The current seven-pointed Commonwealth Star version was introduced by a proclamation dated 8 December 1908.

The dimensions, colours and design were formally gazetted in 1934 and in 1954 the flag became recognised by, and legally defined in, the Flags Act 1953 the “Australian National Flag”. The flag has 4 quarters or cantons. The part of the flag on the left as you look at it is referred to as the hoist and t

he other half is referred to as the fly. 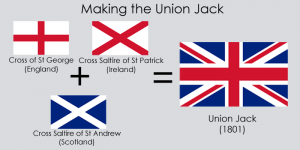 The Commonwealth Star is the emblem of Australian Federation and is housed in bottom left canton. Six of the points represent the states and the seventh all the federal territories, which together constitute the nation.

The constellation of the Southern Cross, housed in both the 2nd and 4th cantons or the fly. indicate our geographical location in the southern hemisphere.

The southern cross is a constellation that only appears in the Southern Hemisphere. Australia’s southern cross has the four brightest white seven-pointed stars, Alpha, Beta, Gamma, Delta and includes a fifth, smaller, 5-pointed star named Epsilon. The stars also relate to various indigenous legends and remind us of our rich and precious Aboriginal and Torres Strait heritage.

Of note the Australian Army is recognised as the custodian of our National Flag.