ATSIDMQI, a volunteer organisation, was originally formed in 2016  with the support of Griffith University, to ensure that the sacrifices and service to Country of these men and women are recognised and honoured.

The Committee’s mission was to seek and approve a design, raise all relevant funding, approve design manufacture, and install a memorial in Brisbane’s ANZAC Square, to honour, respect and remember Queensland’s Aboriginal and Torres Strait Islander men and women. Not only those who have paid the supreme sacrifice, also to those who have served and remain serving. 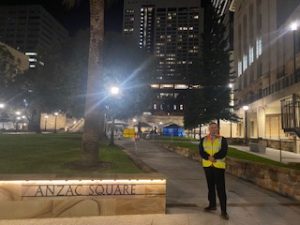 Remembrance and its Eternal Flame. I sense it tells yet another story of our proud and rich Defence Force’s Service, whilst also reinforcing how inclusive this open space truly is.

In 2020 The Memorial was declared, by the Queensland Premier, to be a Queensland State Memorial. This wonderful Memorial was officially unveiled on the 1st day of National Reconciliation Week 2022, Friday 27th May.

It was a long-anticipated event, a huge amount of work culminating in a wonderful occasion.

In addition to the huge investment of time and energy provided by Lorraine, Corporate Protection supported the unveiling with security personnel deployed after-hours in the lead up to the unveiling and Paramedic support on the day to support the huge crowd attending. 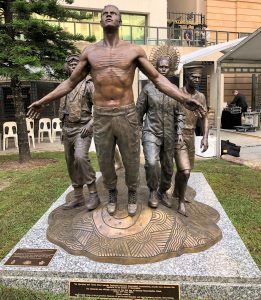 The $1.2 million memorial is to be proudly gifted, by ATSIDMQI, to the people of Queensland as a legacy.

Australian War Memorial records reaffirm that thousands of Aboriginal and Torres Strait Islander peoples have served in the Australian Defence Forces since the 1860s and possibly earlier. It is important to note, that during the beginning of the First World War any attempts for them to enlist were rejected, though many did serve by hiding their true identities.

More than 1000 served in the First World War, and more than 4000 in the Second World War. Aboriginal and Torres Strait Islander peoples also served in the Korean War from 1950 to 1953 and the Vietnam War from 1962 to 1975 as well as in Borneo and Indonesia.

Aboriginal and Torres Strait Islander peoples proudly continue to serve wherever they are needed at home and abroad. In recent years, Aboriginal and Torres Strait people have deployed on various peacekeeping, peace monitoring, and Humanitarian operations. Furthermore, they have deployed on various combat operations, throughout the Middle East, Iraq, Afghanistan, Timor-Leste and the Solomon Islands.