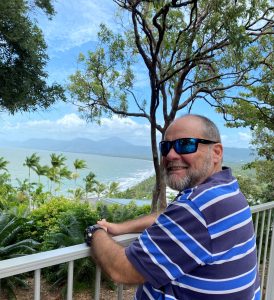 We caught up to Mark at work at Dalrymple Bay Coal terminal. Mark says he is ‘one of the lucky ones’ as he works Mon-Friday. Not sure how lucky though as he starts at 4am!!

It was also the day after his birthday but more on that in a minute!

What is your professional background?

I had 30 years in the Northern Territory Police Force. I grew up in Mackay and lived there until 1991 when I joined the Police Force in General Duties (uniformed first responder), including Darwin, Alice Springs and some very remote locations like Tennant Creek (in the middle of nowhere), Ali Curung, an indigenous community of around 200 people 200km south east of Tennant Creek.

I did many years at the rank of Sergeant. My last job was running the administration at Darwin Police Stations responsible for 134 people including roster and HR.

I joined CPA last year in May. I am actually currently on Long Service Leave with the NT police and do not retire officially until July this year.

Where are you working now?

I am working at DBCT, I am Site Security Supervisor. As I mentioned I work Monday to Friday with a very early start. I applied for the position in January and they kept the position open until May, Zane Kemp filled in for me until I could start. Zane was the Area Coordinator for Mackay so he was very good to fill in until I was available.

What other CPA Group sites have you worked?

This is my first site – it was a steep learning curve, I had no background but it has been fascinating. Mackay has changed since I was here but now mining is a big part of the local industry.

What are your primary responsibilities?

I am responsible for site access, looking after a small team of 8 full time guards and about 4 casuals. Rostering the team. It is a good team that is really pulling together with a very positive outlook. It was my birthday yesterday and the team left a gift and card signed by everyone on my desk.

When I first arrived, we were also providing COVID screening and there were around 20 CPA people on site with around 10 additional casuals, felt like herding cats initially.

What do you find most challenging or fulfilling in your role?

The way the team all works together. I am particularly proud of the attitude amongst the team. When I started, Harley gave me the challenge of getting the contract renewed, the renewal is looking positive. He also wanted a real team focus and I think the team generally looks forward to coming to work and it is one of the things I am most proud of. I have been able to work on developing some staff with some succession planning and it has been great to see some of the team filling in when supervisors are on leave.

And what do you do in your spare time?

Spare time – what’s that?!! I don’t do much during the week with my work hours.

On weekends I spend time with my partner who works night shift so I don’t see her much for the first few days of the week. We like drives and going out to dinner. I love Rugby League and I am a Broncos tragic.

I have just had a holiday, my mum just turned 90 so we went to Cairns to help celebrate her birthday. We then went to Port Douglas for a week’s holiday, lying around and eating and drinking too much!

What would your manager say?

(Laughs!) My manager is Zane Kemp, managed by Tad.  I think they would generally be happy. I do think there is room for improvement. I have had some nice things said by Zane, Tad and Harley. You are only as good as your last mistake, so I am always on my guard not to let it go to my head.

I think they are reasonably happy.

I was initially interviewed by Pete Shepherd and Harley, I hope Harley is happy that he employed an ex-Policeman! I’m happy doing what I am doing.

Mark has proven to be an outstanding leader and has given the DBCT team great direction.  Mark’s dedication and hard work has been instrumental in CPA receiving a contract renewal of 3 years at DBCT. Mark is a very fair person when it comes to being a supervisor, he will provide accolades when deserved and will also address issues when they arise in a professional manner. Mark will defend his team when required and push for improvements at site when required. Mark has developed a great rapport with the client and they have great faith in Mark leading the team to providing the best service delivery CPA can deliver. Mark has gone over and above at times to ensure compliance at site, by attending late night call outs to site to assist with operational matters. Mark has a calm demeanour and is always receptive when I have requested anything operationally for site.  From what I have seen, the staff are also very receptive to Mark’s leadership and I hope he can continue to lead the team over the coming years and continue to build the relationship with his staff and also DBCT. A big thanks to Mark from management at CPA as he provides us with the confidence that the job will be done right.